Letterkenny Shopping Centre was jam-packed Saturday as hundreds of fans turned up to meet former Ireland International soccer goalkeeper Shay Given as the world-renowned player was doing a book signing of his new autobiography
‘Any Given Saturday.’
Fans were delighted to get to chat to the Lifford star and to get his autograph as a special keepsake but Shay took time out to make a very important signing……his autograph on a very special golf bag which is to be raffled in a grand charity draw with the proceeds going to the Children’s National Ambulance Service BUMBLEance.
On hearing of the draw taking place, Shay was only too delighted to add his name to the growing list of professional sportsmen, celebrities, singers, stage and screen actors that draw organiser Eamonn Davis has already succeeded in obtaining for the bag.
Eamonn himself was also delighted to get Shay’s signature as it was Eamonn’s father Eddie Davis [Derry] who was instrumental in Shay traveling over to his first trial club, Bradford City, who’s then manager was none other than Frank Stapleton, the former Manchester United, Arsenal and Irish International footballer.
Shay also presented Eamonn with a signed edition of his book, ‘Any Given Saturday’ to be entered as a prize in the draw.
Picture shows Shay ‘signing on’ under the watchful eye of draw organiser Eamonn Davis

BUMBLEance is a children’s national ambulance service, the world’s first interactive service, which delivers safe and comfortable transportation of sick children to and from children’s hospitals, treatment, respite and hospice centres.

While providing the highest standards in professional medical care, BUMBLEance’s entertainment system includes a TV, Xbox, DVD’s, sensory lighting, Music, books, games, consoles, Wi-Fi, Social Media streaming and a PlayStation. Additionally, the bright and fun exterior and interior décor of the BUMBLEette will provide a distinctively positive and reassuring first impression to young patients who are often facing a challenging and somewhat daunting journey from two to five hours all over Ireland and is designed and tailored to distract, comfort and entertain Ireland’s youngest and most sick patients as they travel, whilst providing smiles and compassion in equal measure.

Created by parents who understand the struggle of caring for a sick child, their top priority is the comfort and safety of BUMBLEance children and, understanding the stress involved in transporting sick children, their aim is to increase and develop their fleet of vehicles to serve even more children in every region and county in Ireland.

The local Donegal/North West branch was set up in November 2016 to directly support sick children throughout the region.
Tony Heffernan, Founder and CEO said: ‘The new Donegal and North West BUMBLEette vehicle will be the first in a series of regional BUMBLEettes to be launched in Ireland. Many areas in the North West of Ireland do not have major transportation links suitable for sick children who are required to travel to and from hospital on an ongoing basis, thus BUMBLEance and BUMBLEettes are the only solution for these young patients and their families.’

Eamonn, an annual Lourdes pilgrim, has witnessed first hand what many sick children and their parents have to suffer. Earlier this year, he had the opportunity to purchase a golf bag on ebay. “I noticed someone with the bag for sale stating that it had autographs of top sportspeople and celebrities on it. I thought that, if I purchased it, then I could add to those autographs at the Dubai Duty Free Irish Open and sell tickets with the proceeds going to a charity, then recently I read about BUMBLEance coming to Donegal and decided that that was he ideal charity to fundraise for”.

Between now and the draw taking place, Eamonn hopes to add many other well known autographs to the bag, especially those from Donegal. “it certainly will be a most sought after prize. There will be other memorabilia and prizes as well”, says Eamonn, “ such as a unique painting by renowned Donegal artist Stephen Bennett depicting Ryder Cup winning Captain Paul Mc Ginley and tour players Rory Mc Ilroy and Graeme Mc Dowell, an original photographic print on canvas of Glashedy’s iconic 14th hole by local photographer Stevie Toye of Logopix, an autobiographical ‘Rory’s Club’ signed by Rory Mc Ilroy, a golfers’ pictorial book signed by Padraig Harrington and Paul Mc Ginley, a golf hat signed by Shane Lowry etc. etc. and many more prizes that have been offered by local golf clubs, sports shops, hotels and businesses”.

Tickets are now on sale at €10 per ticket, books of ten, and with the draw due to take place early December 2017, what a fantastic selection of Christmas presents!
Anyone interested can contact
Eamonn on 086-8238753. 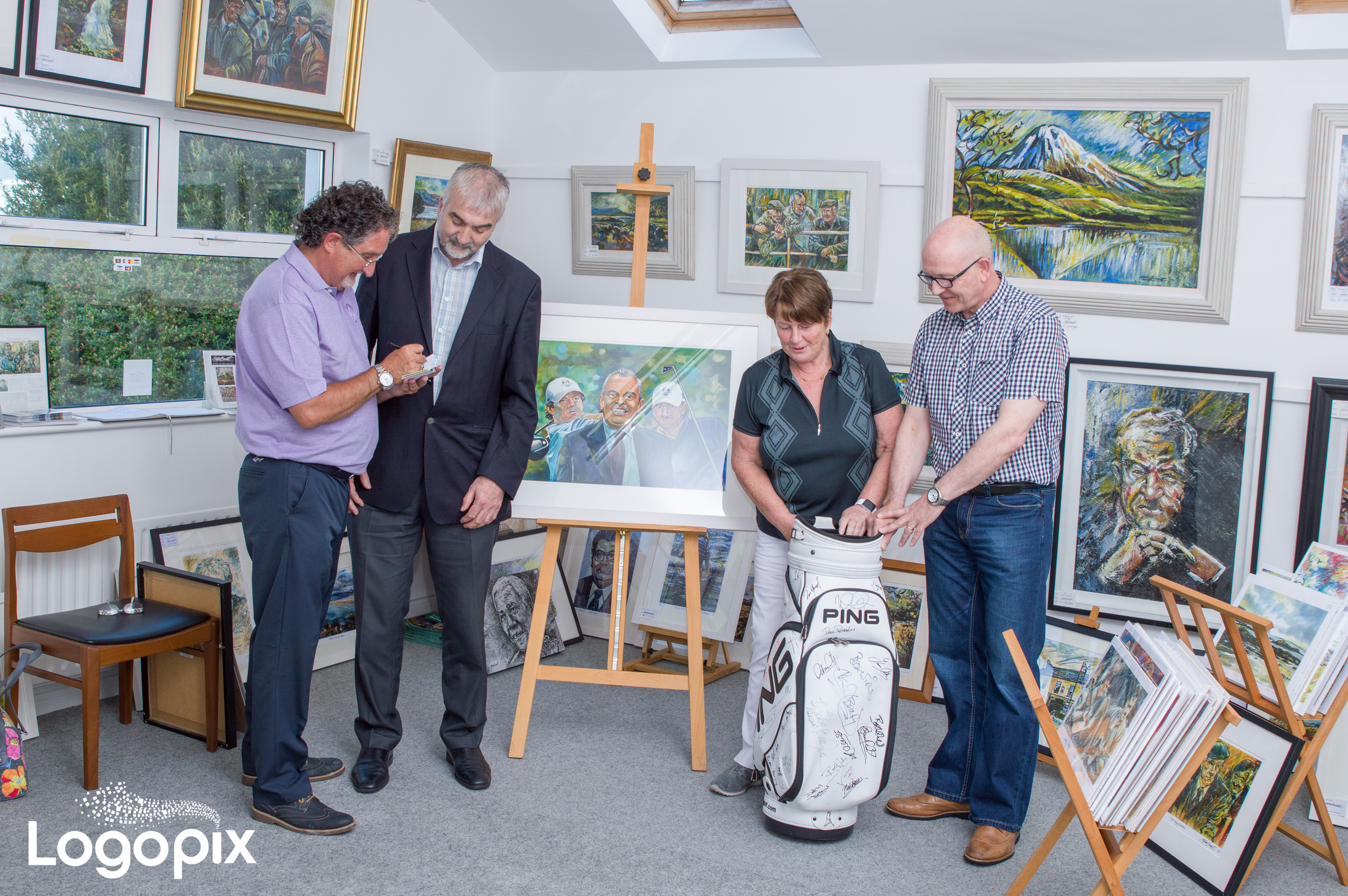 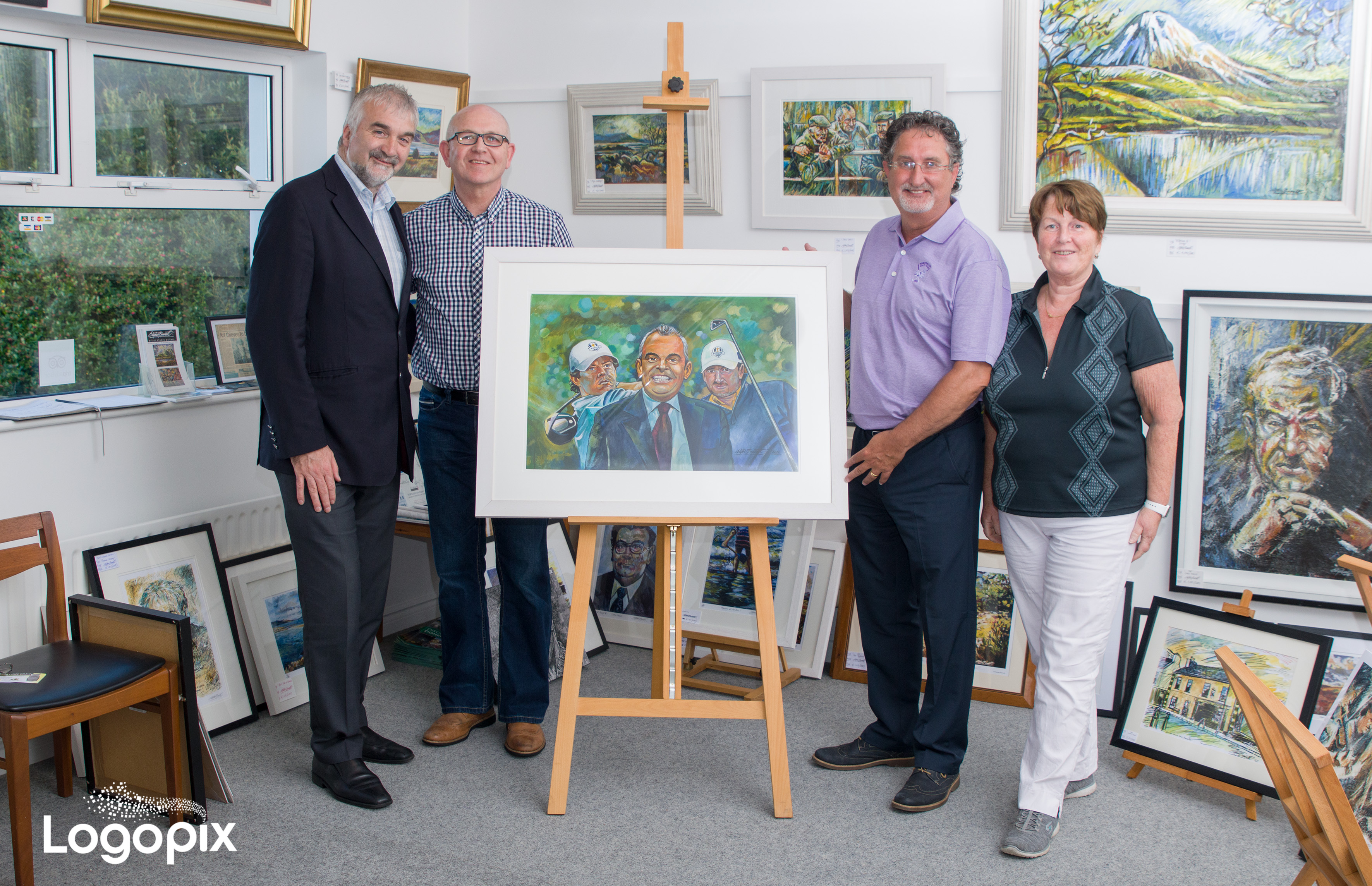 Our Vision Our Ambulances Our History Our People Our Supporters

We use cookies to ensure that we give you the best experience on our website. If you continue to use this site we will assume that you are happy with it.OkRead more